Seabin: the project has come true! 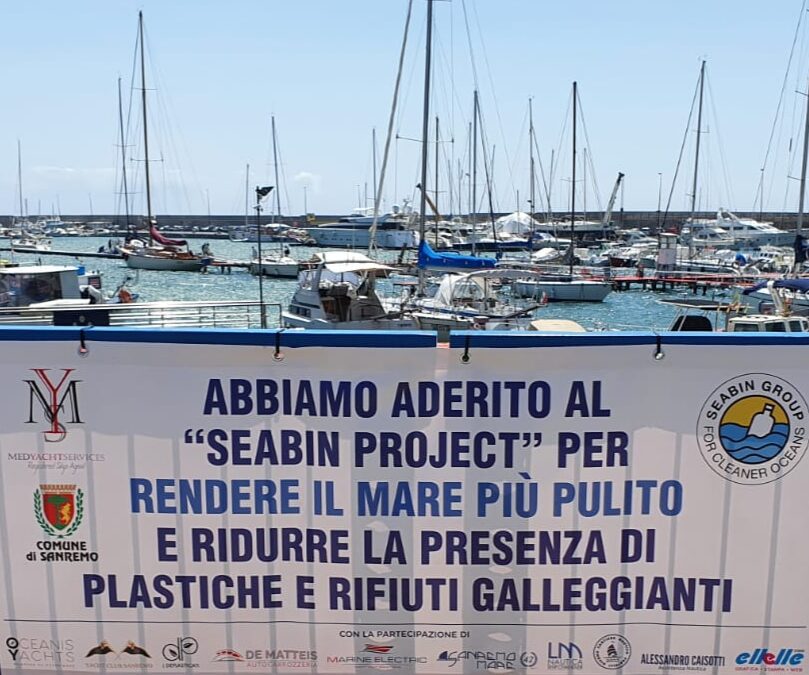 The first Seabin arrives in the Old Port of Sanremo!

We are more than glad to announce the realization of a new project we have been working on over the last few months: the installation of the first Seabin in the Old Port of Sanremo!

After more than one year we can finally say that the project has come true! The Seabin has just been installed in Porto Vecchio, and during the last weekend we have celebrated this great achievement with the other partners involved, in the opening ceremony that took place at the Yacht Club of Sanremo, on Saturday June 19th 2021.

We have decided to donate a Seabin to the old port of Sanremo as we wanted to be an active part in building a sustainable future and contribute to the change we would like to see in this world; and as yacht agents, we have decided to start from what we do love most: the sea! We could not be happier since the seabin is already working to make our sea cleaner!

But first let’s take a step back and focus on a short report to get to understand why this installation is so important, before explaining in more details what is a seabin and how does it work.

Plastic: some numbers you need to know

In this critical scenario the Mediterranean Sea is one of the most affected by the problem of plastic waste. As particularly dangerous we find the microplastics (with a diameter of less than 5 mm) which get attached to the algae and get then ingested by the fish. Just to mention one example, by analyzing some fishes such as bluefin tuna and swordfish, microplastics are found in 18% of the cases (source: Ispra studies) – therefore, indirectly, each human being ingests an average of 1,769 microplastic particles per week simply by drinking water (Source: Il Sole 24 ore).

As a consequence, the amount of plastic that everyday get spilled into the sea is damaging not only the marine fauna, but also the whole eco-system, getting it to a point almost irreversible.

How can we solve this problem?

The solution has arrived from two Australian guys: Pete Ceglinski and Andrew Turton. It all started from their passion for the ocean and a simple intuition “If we can have rubbish bins on land then why not have them in the water?” and then the journey began!

Supported by a decisive crowdfunding campaign that raised over $ 260,000 and a viral video with more than 350 million views on Youtube and social media, the Seabin was tested in some ports among Europe and the United States, before its launch it on the market at the end of 2017. Now the project counts more than 860 seabins already installed around the planet!

What is the seabin?

The Seabin is essentially a waste collection basket floating on the surface of the water. It acts as a floating garbage bin that skims the surface of the water allowing the collection of plastics and other kinds of waste from the sea. Depending on the weather conditions and the volume of garbage, it is able to capture about 1.5 kg of waste per day, that turns into, over 500 kg per year. It also collects microplastics from 5 to 2 mm in diameter and 0.3 mm microfibers and many common waste that ends up in the seas such as cigarette butts, cotton buds and more.

It has been designed to be placed near floating docks, marinas, private jetties, waterways, residential lakes and yacht clubs. It can also be mounted directly on a yacht. The Seabin is fixed to a dock with the upper part of the device at a surface level. Thanks to the spontaneous action of the wind and the currents, the debris will convey directly into the device. The water pump, connected to the base of the unit, is capable of treating 25,000 liters of sea water per hour. The waste is captured in the bag, which can contain up to a maximum of 20 kg, while the water flows through the pump and returns to the sea. When the bag is full, it is emptied and cleaned. Inside Seabin there is also the possibility of inserting a filter to separate water and oils, so that only clean water flows into the so that only clean water flows into the sea (Source: Lifegate).

The Seabin has already arrived in many Italian and foreign ports: 860 Seabins have been installed worldwide and it has finally arrived to the Old Port of Sanremo! We would like to thank the municipal administration of Sanremo which has given us the opportunity to bring this innovative project into our port as well!

Our long-term goal is to donate a Seabin to a new port per year, starting from where our offices are located.

If you want to join this revolution we invite to have a look at the website of the Seabin Project.

We really hope this project will help to raise awareness among people and institutions and that it will encourage other operators to move their first steps to make our seas cleaner!